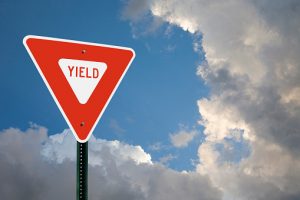 You arrive at a four-way intersection and come to a complete stop at a stop sign. It's then your turn to proceed. However, you're suddenly broadsided by a driver who either failed to stop or proceeded without first yielding the right-of-way.

Accidents like this are very common on Omaha roadways and are caused by drivers who show no regard for other road users. Typically, at a four-way intersection directed by traffic lights, the signals are clear: slow down, stop, and proceed as the lights change.

However, certain situations aren't always clear. Drivers aren't necessarily granted the right to proceed as they wish. Rather, they must yield the right-of-way to other vehicles.

What the law states

Statute 60-6,147 requires left-turning drivers to yield the right-of-way to vehicles traveling from the opposite direction or within close proximity.

Dangers of failing to yield

Accidents caused by failure to yield are attributable to two factors: drivers knowingly violating a right-of-way law or drivers assuming they have the right-of-way when they don't. Other factors can include distracted driving, impaired driving, recklessness, and even speeding.

Common accidents linked to failure to yield the right-of-way include:

If you or a loved one sustained injuries in a crash caused by another driver's failure to yield the right-of-way, it's crucial that you file a personal injury claim as soon as possible. An experienced auto accident attorney at Ausman Law Firm P.C., L.L.O. can help you through the process and fight to maximize your compensation.