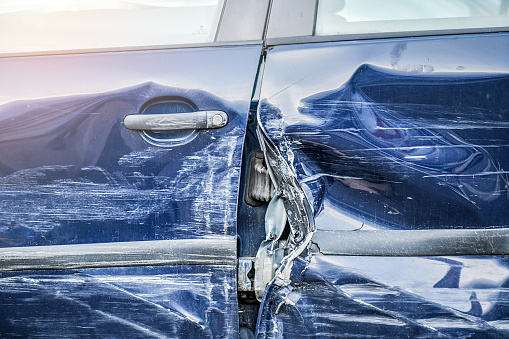 Local residents know too well about the traffic dangers in their Omaha neighborhood. The city’s traffic engineers agree. But can anything be done to prevent car accidents and make the area safer?

‘I think somebody hit the house again’

Annette Bland did not need a traffic study to know the corner of 20th and Grace streets, where she has lived for two decades, is a public health risk. She can hear – and feel – evidence of the dangers.

The latest incident occurred on Oct. 5, 2021, when a car allegedly ran a stop sign, causing two vehicles to crash into her house.

“I was preparing myself to get into the shower and I heard a big crash and the house, the whole house, shook, and so I said, ‘girl, what in the world is that?’ and my daughter said, ‘I think somebody hit the house again,’” Bland said in an interview with WOWT 6 News.

Both Bland and her neighbor say vehicles for years have crashed into their homes or ended up in their front yards after car accidents. The latest crash was not news to the neighbor, who said her home was struck most recently about a year ago. “No, I wasn’t surprised, I wasn’t surprised at all,” she said.

Besides motorists running stop signs, the women said drivers frequently speed on the street and that blind spots pose a problem for drivers.

“We need speed bumps,” Bland said. “The street over, to the east of us, they have speed bumps. Why can’t we have speed bumps? It’s desperately needed. We, as residents, deserve it because we want our children to be safe.”

Can speed adjustments solve the problem?

Omaha’s city traffic engineer says a study by his office supports some of the observations of the two women. But, he said, the city can only do so much based on traffic statistics.

Where does this leave neighborhood residents? The engineer said they can petition his office to address the problematic intersection.

If you were injured in a car accident that wasn't your fault—whether the crash occurred at an intersection or anywhere else in Omaha—our law firm can review the details of your case for free and give you an idea of your legal rights and options.

At Ausman Law Firm, P.C., L.L.O. our personal injury attorneys have the knowledge, experience, and resources to handle every aspect of your claim and build a compelling case for maximum compensation.

We know the games insurance companies often play. We know it's common for insurance adjusters to purposefully delay, dispute, and deny perfectly valid injury claims to save money for the insurance company. That's why we're prepared to aggressively advocate for your best interests and fight for the best possible outcome in your case.

To learn more about how we can help with your potential legal case, contact us today for a free consultation with an experienced Omaha car accident lawyer.